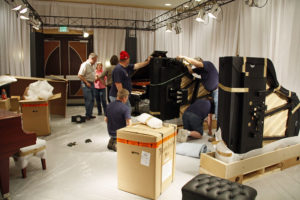 Bosendorfer, in the past, has used NAMM to show some beautiful examples of our cabinet design skills and veneer work. However with business being slow and space smaller, it made more sense to show instruments that have more immediate sales potential. This year we displayed a model 290 Imperial with the CEUS reproducing system, a model 200 Johann Strauss, a model 214 in Jactoba (ya-TOE-ba) and a new example of the CS series. All these pianos, with the exception of the 290, were sold to dealers during the show. The 290 CEUS is going to North Carolina to (hopefully) be used in a recording project that will be discussed later.

Our new display room in the Marriott was small, with thick carpet and pipe and drape on the walls, resulting in a very acoustically “dry” room. At first it seemed to be  negative, since good piano sound usually means echo and reverberation to some degree. However as the show went on, we grew to really like the change. The extreme lack of reverb focused ones attention on the clarity of the sound and the typical Bosendorfer sustain. People coming in played completely differently and the “bangers” were very intimidated and didn’t stay very long. However, because everything was so close, it did make having a conversation a little challenging when someone was playing over mezzo piano. The reality is that you can really hear and understand the differences in piano brands in this kind of very dry, small environment. Everything, including the pianist, sounds bigger in a big, acoustically wet room. But that does not mean it is good.

Bosendorfer expanded and upgraded the CS line last year, but Lufthansa destroyed the one example we had brought to show dealers at Le Merigot. That combined with business conditions made the CS introduction last year  a bit of a non event so we treated this year as a new introduction. The line expanded to include (re-include) the models 170 and 180. The upgrade means that the ONLY difference between the CS and the standard line was the finish and some case details. Everything technical, including stringing, is exactly the same. This actually makes manufacturing easier, since we don’t need to decide if a particular instrument is CS or standard line until the very end of production when the finish is applied. The downside of the out-of-the-gun matte finish on the CS is that it is impossible to get a perfect repair. This is fine for schools and institutions, the primary target market of the line, where pianos get the tar beat out of them anyway. But it can be an issue in homes. Forewarned is forearmed.

There is more than just the room change that makes this year different.  There was a major reorganization announced in Vienna in late November. Basically the decision was made that Bosendorfer was too small to be able to afford its own worldwide sales and marketing team. So Bosendorfer will now concentrate on being a manufacturer and sales and marketing activities will be passed on to the representative Yamaha companies around the world. Here that means Yamaha Corporation of America (YCA) for the 50 states and Yamaha Canada for, well, Canada.

I don’t necessarily disagree with this decision. Business has been down and something in our overall structure had to change. Yamaha has stated over and over that they plan no changes in the way we make pianos or where we make them, so stepping into the distribution scene makes sense. The challenge is that Bosendorfer is a very different product from the standard Yamaha piano, sold by completely different dealers (with some exceptions) and by very different sales reps. Pianos are not just pianos at this level and credibility is a very important brand attribute. There  is a lot of work to do and the first step was to bring the public image of the 2 companies slightly closer together which meant a room next to Yamaha at the Marriott.

Another interesting twist is that technically my job with Bosendorfer ends on March 31 of this year. Bosendorfer, if you remember, will no longer have its own sales and marketing team, of which myself, Ray Chandler and Susan Muhler are all part. There have been some good discussions about Ray and myself continuing with Yamaha in some capacity but the clear casualty is my friend and colleague, Susan. Maybe more on that later, but her impact on Bosendorfer will be missed. I’m not crying too much for her, though. More people visited the booth to see her than to see the pianos and I’m fairly sure she will land on her feet.