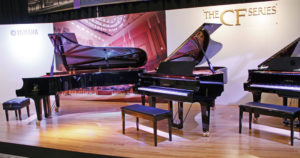 Yamaha has had a high end “craft built” line for a number of years and has been a very serious builder of concert pianos for decades. The concert grand, the CFIII (CF3) has undergone a number of iterations and experiments, resulting in the model CFIIIS that has been the flagship for the last 8 years or so.

This year Yamaha is unveiling, both at NAMM and at the Frankfurt show,  the newest version called the CFX (X, not 10) and 2 smaller models with the same construction techniques, the CF4 and CF6. While there was a lot for Yamaha to talk about at NAMM this year, they did focus a lot of attention on these new pianos, hosting a press conference at which Mitsuru Umemura, the President of Yamaha Corporation global spoke and pianist Frederic Chiu performed. The performance (short but effective) was repeated at the Yamaha Dealers breakfast on Friday.

NAMM, oddly enough, is not the place to evaluate pianos and the huge, diverse Yamaha display makes it essentially impossible. Besides, talking about piano sound is a sure fire way to make enemies and drive pretty girls from the room. That being said, I will make a couple of observations.

Yamaha makes a really really good concert piano. They are very serious builders and use some hand techniques that they don’t even use at Bosendorfer (hand chiseling the rib tails).  They are looking for what I call a “high rim tension” sound, with power and overtones. But they also look for a lyrical sweetness and sustain and are very comfortable trading some raw power and noise for these characteristics. This combination makes the end result very pleasing and flexible as long as your standard of comparison is not the typical, rather unpleasant standard that many competition participants seem to prefer these days.

Knowing that NAMM was not the place to evaluate pianos,  I was, as expected, unimpressed with the sound at the press conference. It was  very nice but no special characteristics could be heard in that environment. The next day the piano was moved to a different room and set on a 4 foot high stage for the Dealers Breakfast. Frederic played the same repertoire (Chopin and his own Prokofiev transcription) but the effect, at least on me, was quite different. Here the characteristics and color really came out more and I was very impressed. This is a concert piano with a real personality and range of colors.

The smaller sizes seem to share the tonal characteristics. One interesting construction feature is that the 2 smaller pianos have “open window” pinblocks where the top surface of the pinblock is exposed, rather than hidden below the plate. The concert grand does not have this feature. The concert grand on the other hand exhibits holes drilled in the bass bridge which is a characteristic of high end european concert pianos but has not, at least in my memory, appeared on Yamaha pianos before.

No single detail makes a piano but there is really something important here. How it is accepted remains to be seen but I take my hat off to Yamaha for pursuing an alternative concert piano with such determination.

Yamaha has offered 2 smaller sizes of crafted pianos, called the S4 and S6 (6’3″ and 6’11” respectively). One of the complaints about the marketing of these pianos is that they look exactly like the regular line Yamaha pianos. It is thought that potential customers were turned off on spending $20,000 to $30,000 more on a piano that looks exactly like a neighbors much cheaper instrument. Kawai addressed this by giving their upper end a different name, a sort of Toyota/Lexus approach. Yamaha addressed these issues with some very interesting case details, including a unique pointed arm and unusual pedal lyre.

The other interesting fact is that one would logically assume that the CF4 and CF6 would replace the S4 and S6  but no, Yamaha Japan feels compelled to offer all 4 models. Yamaha Corporation of America has elected to import only the 2 new CF models leaving the S series to the rest of the world. Good decision, I think. The S series are very nice but having 2 separate lines is much too confusing to the market.