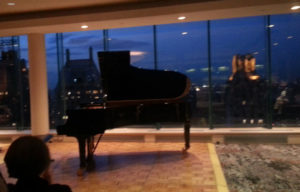 I was invited to an event sponsered by the “new” Fazioli dealer in NYC. I put “new” in quotes because while the dealership stays the same, Klavierhaus, much has changed. This includs the new involvement by Michael and Marina Harrison formerly of Faust Harrison and Allegro Pianos, and a new location caused by the move of Beethoven Pianos. Confused? That’s OK, it’s confusing. But I’ll go into all that later.

The event was described as “An Evening with Paolo Fazioli” and included brief performances by 11 different pianists. The music was varied and great,the select crowd appreciative and enthusiastic. However the location stole the show; The Estrela Penthouse on the 44th floor of the Parker Meridien Hotel in New York City. The piano was set against a wall of windows with an expansive view of Central Park, a dramatic setting indeed. The Parker Meridien is, apparently, the new location of the Klavierhaus salesroom. It will be located in a now closed restaurant space on the ground floor facing 56th St. How a piano store focusing on high end Steinway rebuilds and even higher end Fazioli pianos is able to afford ground floor space in such an extraordinary area is a story in itself…a story that I don’t understand well enough to document and as the space is still under construction, I won’t get ahead of things.

These are all wonderful, skilled musicians and I enjoyed all the performances, but the real revelation for me was Vadim Neselovskyi, a young Ukrainian pianist with a style and musical intelligence all his own.

Go here and listen to the 3 tracks from his CD titled Music For September and see if you don’t agree.