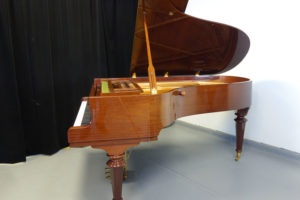 This Feurich 190 has been cared for but not played very much lately so the action was a little sluggish. Most of that sluggishness came from the hammer flanges. However a little care and attention quickly eased them up and brought the touch weight down to where it was originally designed to be..about 52 grams. Wow, did the tone blossom after that!

This piano shows that with fine pianos, EVERYTHING plays a part in tone production.