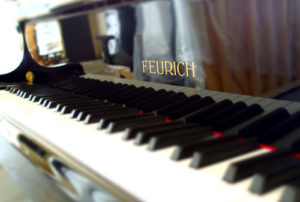 I have two Ningbo Feurich grands; a model 178 and a model 218. Ningbo is shorthand for the pianos made to our specifications at the Hailun factory, as opposed to Feurich pianos of German origin.

There are a number of differences between a Feurich 178 and a Hailun 178, including different strings (Paulello) and different action ratios and different hammers. Although Feurich used Abel hammers in the Ningbo production, I was not completely satisfied with the sound and was convinced there was a better piano hiding below the surface.

Even with these German hammers, the sound was more “asian” than I liked. The European influence was there with color and sustain, but so was a brassyness and loudness that didn’t ultimately make me happy.

So, I decided to experiment, primarily with hammers but also with some other action parts. I decided to call these pianos “M” for Massgefertigt, which means tailor made in German. The 178 M is stock except for a custom set of cold pressed Ronsen hammers made with Weikert felt. These are beautiful, light hammers with felt made in the “Weikert” manner by the Wurzen Felt Company in Germany. Ray Negron of the Ronsen Piano Hammer Company uses cold hand presses to shape the felt and the result of this careful effort shows. Only very light and selective voicing was needed, with a little juicing in the high treble and low bass.

The 178 M is a beautiful piano, with warm, round tone, rich color and long sustain.

The 218M got a different treatment.