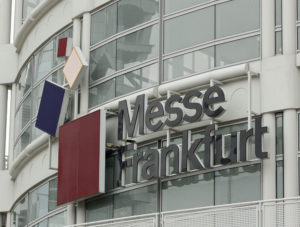 There are 2 major Musical Instrument trade shows each year. The NAMM show, held in Los Angeles in January and the Frankfurt Messe, in March in Frankfurt Germany. The shows have much of the same content and atmosphere. They are both huge shows with everything from violins to conducting batons to disco fog machines and everything in between. While most of the big vendors are the same (Yamaha, Kawai, Roland, Fender, etc) there are some striking regional differences.

For example, who knew that accordions were such important instruments in Europe? There were probably 30 accordion makers and stunning displays of accordion virtuosity. We suffer under the Lawrence Welk impression of accordions in this country. In the hands of a skilled European artist, it is an instrument of uncommon richness and expression.

Other displays centered on the strong tradition of civic brass bands in Germany, and included interesting instruments and a variety of uniform makers.These unusual brass instruments included a wide selection of opera specific trumpets (one set just for Aida, another for specific Wagner operas).  I didn’t notice  many performances by brass or woodwind artists but there were a number of what appeared to be spontaneous performances by acoustic guitar solo artists and small ensembles and a stunning duet playing what appeared to be the professional version of blades of grass held between the palms and blown through (you had to be there).

There were, of course ( I guess), Alpen Horns on display, harmonicas of every possible size as well as the normal room after room of guitars, amplifiers, speaker systems, drums and the like.

I was not there for the accordions, however. I was there for the pianos and specifically the high end ones which this year had their own display room.

Trade shows have been problematic for piano makers over the past years. The cost of renting display space is significant onto which one adds the cost of transporting the instruments as well as the tuning and prep that goes into making them ready. Large parts of the music show floor, whether at NAMM or Frankfurt, have very loud volume levels from the guitars screaming and the drums pounding. The brass displays are particularly loud with every trumpeter bent on proving their ability to hit a fff high C, over and over! This is NOT the environment in which to listen to the fine details of piano sound.

A number of the European makers chose not to attend the Frankfurt show last year for these reasons. That caused the the show organizers to create a separate piano salon this year, quite apart from the noise and the bustle of the regular show floor. From my perspective the piano salon was quite pleasant and a number of the makers agreed.

Still business conditions kept some of the makers away and others have a tradition of not displaying. The makers that were there included  Blüthner, Forster, Steingraeber, Grotrian, Fazioli, Schimmel, Seiler and Petrof.

By most reports, business for the piano makers was quite good, considering overall business conditions. There was what appeared to be a good flow of visitors and meetings clearly had to be scheduled since a couple of the makers did not appear to have any spare time at all.

Blüthner had the biggest booth of the group and had a separate display for the recently acquired Ronisch brand. Schimmel displayed and announced that they had renegotiated with creditors and were back in family control. Seiler displayed with no hint of the ownership by Samick.