The music world lost a great man on Sunday. Dr. Mark P. Malkovich III, artistic director of the Newport Music Festival, died in a car accident in Minnesota. I also lost a dear friend and mentor. The words of the title of this post were uttered by Leonard Bernstein when he learned of the death of Glenn Gould. They could not be more appropriate.

I will leave it to others, at least for now, to extol on his virtues and how far he brought the Newport Festival. I am going to comment on what it means to know somebody who truly is a “being of music”.

I first met Mark in 1980 when I went to Newport to maintain the Bosendorfers that were used as concert pianos. Later I went back every year in my role as Artist Services Director for Yamaha as Yamaha had become the official piano of the Festival.

Mark and I collaborated on 3 recitals at Alice Tully Hall in NYC. We presented Sergio Fiorentino (twice) and Dubravka Tomsic. Now maybe you don’t know those names (lots of professionals did not know Fiorentino) and that’s OK. But if you do, you know the almost unbelievable level of artistry that these two humble, relatively unsung pianists represented. Hearing these 2 artists at Newport and again at Tully were among the highlights of my music loving life.

Mark brought me into the world of these artists, and many more like them, as well as into a world of repertoire that is almost beyond imagination. And through it all he was brilliant, funny, supportive, loving and unique. Music was his life, his soul and his being and it showed. His loss will show too.

I’ve said before that I think the Newport Festival is the greatest music festival in the world. It was Mark’s artistic vision, management and humanness that made it so. Go here to learn more about the festival and click on the Newport Festival category on the right to read my earlier posts.

Rest in peace Mark. Your friends will miss you. 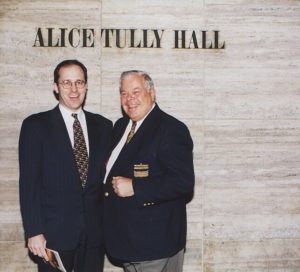