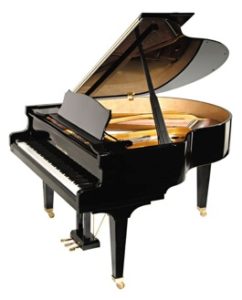 Dear Udo
It has been far too long since my last visit to Bayreuth. My son is 17 now and while he will someday treasure the photograph of himself at Wagners grave, alas, that day is not yet here.

I of course remember vividly my then 2nd visit to your works and your compelling description of the steps required to make a Steingraeber piano. I loved the Steingraeber sound before then and I love it to this day, even more so because I’ve had more opportunities to work on and become familiar with your fine pianos.

I actually have few Steingraebers under my regular care due primarily to their relative rarity, but the ones I do maintain are wonderful instruments.

This includes a particular A170 which I have written about here before. A lovely piano with some nagging tuning instability problems which I was convinced were not really the fault of the piano. I say that cautiously because in the same room was a Bluthner model 2 which held tunings like a piece of iron welded to a slab of granite…in other words it held tunings very well. Both pianos have Dampp Chaser systems installed,and both seemed otherwise perfect in construction so it was easy to chalk up the A170’s tuning problems to…what exactly?

I was convinced it was humidity, even though the Dampp Chaser systems were working as designed. So I experimented and disconnected the heating rods on the Steingraeber.

Udo, I’m sure you’re familiar with the Dampp Chaser system, now actually called the Piano Lifesaver system. In case you’re not, it consists of components that limit both the high and low humidity in the immediate vicinity of the piano. There is a bucket that holds water with a heating rod over which are draped paper filters. These filters wick the water up out of the bucket over the heating rod where the water turns into…well…humidity which flows under and around the soundboard. There are also longer, more powerful heating elements that turn on to reduce high humidity. Both components are controlled by a master controller that switches between the two depending on the relative humidity in the environment. The system is calibrated to control the humidity quite closely…something like between 40% and 45%. I’m probably off in the numbers but not too far off.

The Piano Lifesaver system has been around a long time and has been refined and improved and is generally considered to be a very effective way of protecting pianos from drastic swings in humidity. But still, something was not helping this poor Steingraeber.

The winter we’ve been having has been tough, with long periods of deep cold leading to dryness punctuated by periods of some warmth, occasional rain and high humidity. But even without those swings I have found that the humidity around a piano can swing outside of the ranges the Dampp Chaser system looks for, triggering periods of time where the de-humidifier part alternates with the humidifier part, perhaps over the period of a day.

This is the way the system is supposed to work but I was thinking that perhaps that design and the design of the A170 weren’t getting along. So I tuned the piano, disconnected the dehumidifying heating rods and left.

There was no surprise when I returned in about a month and found the Steingraeber wildly out of tune. After all I had upset the humidity environment. But like a parent trying to get their child to sleep through the night, I stuck to my guns, tuned it again and left the heating rods unplugged.

When I returned about 5 weeks later I found a different piano. It was still slightly out of tune in the middle register but no more than what I would have expected during this funky winter we’ve been having. Bringing it back into tune was much less of a struggle then previously and as the careful, detailed tuning proceeded, a wonderful thing happened: a spectacular piano emerged.

I can go on using tired hackneyed adjectives like singing, magical, sublime etc but instead I will simply say that this piano passed, with flying colors, the primary test I use to evaluate a piano: how hard is it for me to get up from playing it.

What’s that Udo? Yes I too am older now and getting up from any seat is more difficult then it used to be…ha ha, funny joke. But no, this was not a physical difficulty, it was an emotional one. The piano grabbed me and would not let go. It had color, it had richness, it had variety, all of which hadn’t been present while the piano was struggling with presence of the heating rods. Remove an outside influence that intellectually should not cause any problem and a truly beautiful instrument emerged. The humidifying part is still operational and we’ll see how things settle as summer (hopefully) emerges, but for now a supportive solution has been found.

Now the A170 is a relatively small piano, about 5’7″ and piano enthusiasts are used to giving allowances to small pianos, particularly in the bass. Not this 170. No, the bass did not challenge concert grands, but it was full, rich, perfectly balanced with the rest of the instrument with a wonderfully even break between the steel strings and the wound strings, traditionally the weak point of small pianos.

Udo, this is a great piano and I just want to pass on my compliments to you and your whole team for creating such an entity. Long may the house of Steingraeber live.