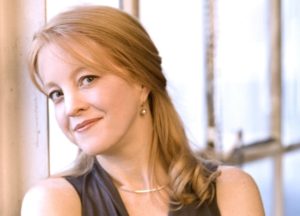 Maria Schneider is one of my musical heroes. She composes for Jazz Orchestra and has brought a welcome new approach to a venerable musical style. This post is related to piano work, but you’ll have to read it all to figure out what the connection is.

First, what is a jazz orchestra? If you’re of a certain age, just think about the Tonight Show band, or the Buddy Rich Orchestra or the Woody Herman Band. Duke Ellington and Count Basie both led jazz orchestras, as did Glenn Miller. The jazz orchestra is usually around 16 to 18 pieces, including trumpets, trombones, saxophones and a rhythm section consisting of piano, bass, drums and usually guitar. The ensemble offers a huge range of sound and style possibilities and is often known for a hard driving style. The jazz orchestra, or “big band” as it is colloquially known is traditionally a source of powerful, driving, loud exciting music. Yes, every so often ballads are brought out to slow things down and show range, but excitement is the key…think Maynard Ferguson!

The jazz orchestra has had many innovators, including Gil Evans, Bob Brookmeyer and Quincy Jones. The instrumentation of the jazz orchestra can vary and often includes various woodwinds (flute, low or high saxophones) doubled by the regular players. There are 2 fundamental components of jazz: syncopation and improvisation and jazz orchestras are prime proponents of both with most often standard 16 bar “tunes” repeated with soloists taken from the various sections.

Back to Maria Schneider who is often referred to as being a pioneer. But this designation is usually in relation to her gender rather then her compositional style, and it truly misses the point. She is a brilliant composer, regardless of gender and style.

Maria takes a traditional ensemble, and stands it on its ear, while honoring the traits that make it such a legendary presence. Her “tunes” lean toward long, long phrases of intricate contrapuntal construction, with complex and shifting harmony and repetitions so disguised as to go unnoticed.

But the soul of jazz, improvisation, is held by her as a high ideal and she does more then allow room in the tune for solos. Her long standing “band”, the Maria Schneider Orchestra, has been in existence for decades and includes some grizzled old veterans of the music scene rather then the young bucks that made up some of the earlier powerhouse orchestras. This means she has developed close personal relationships with her musicians…they have grown to understand her and she has gotten to know them and their individual playing styles so closely that it can be hard to imagine her compositions played by any other ensemble.

Women may lack lack the raw power of men but women have a power all their own. Maria Schneider is a force to be reckoned with.

Maria has taken a traditionally masculine art form and wrapped it in her own musicality and  femininity. She is a being of music. Artistic sensitivity and sensibility oozes out of her pores. While the jazz orchestra is traditionally powerful, Maria brings to it an unstoppable force all her own.

We could be brother and sister from different mothers. We both grew up in the midwest..she in the prairies of southwestern Minnesota, me in the corn fields of southeastern Wisconsin. We both studies jazz composition with a focus on the jazz orchestra, we both moved east. However our paths took different directions. I gave up on the the dream of being a professional composer. She succeeded..wildly.

Where jazz composers of the past heard Harlem, Las Vegas and Hollywood, Maria hears the plains of Minnesota and poetry evocative of early morning walks in the fields and it couldn’t be any other way.

But here is the part that relates to piano voicing. Maria is a master of color. The range of musical color she creates and gets her musicians to present is simply stunning and all to often easy to miss if one gets  (as I do)  swept up in the sophistication of her harmonic language.  And color is a critically important part of the musical palate, whether one is a composer, performer or piano technician.

A high end piano voicer looks to introduce into a piano a range of color possibilities that the pianist can then work with. It can be done, but one must first have an ear for color. One must seek out the opportunities to expand ones ear to hear color.

What does that mean… musical color? Listen to Maria Schneider.