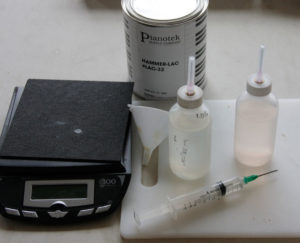 Piano voicing is a fascinating craft.I came of age as a voicer in the 1980’s, a time when there was not the richness of hammer and felt choices  there are today. Back then the world was pretty much divided into Renner and Steinway. The Renner hammers, with which I worked extensively because of their use on Bosendorfers, were pretty dense and hot pressed. The voicing process was pretty much limited to needling the crap out of them to get them down to a reasonable tone. Steinway hammers at the time were pretty much the opposite. They were balls of soft fluff that needed the application of lacquer, usually a substantial amount, to get any tone out of them at all.

Of course, each camp had it’s rabid followers, and I was one. I took pride in my massive right forearm, built up through repetitive needling of rock hard Renner hammers. These were real hammers, where the felt layers (eventually) moved allowing proper piano tone. The felt in Steinway hammers were, in my opinion, glued together with lacquer. These hammers could never produce proper piano tone for this reason. How simple the world was back then.

Alas, the world continued to function and progress, somehow, to the point now where, in a declining piano market, we are offered an incredibly rich array of hammers using a wide variety of felt made by a number of small, craft makers. The whole world of “cold pressed” hammers, easy to ignore in the past as a myth or fantasy, is now real and this world requires different tools and thinking.

To cut to the chase, I am actively working with hammers made by Ray Negron of the Ronsen Piano Hammer company. I’m putting a set made with Bacon felt on a Feurich model 178 to see if I can get a warmer sound than is produced by the stock hammers; hot pressed Wurzen felt. The Bacon felt is the softest of the types available and lacquering is a normal and proper part of the tone-building process. The catch is: what lacquer, how much and where. Ahh, mystery.

The first result, hung but not lacquered, was quite impressive. Round, warm tone until one gets to the treble, where it pretty much becomes too soft to be appropriate. Enter the dreaded lacquer!

But proper tools help. In this case a special lacquer made by PianoTek, industrial syringes for careful, drop by drop application, and a digital scale to get the (secret) proportions right. Drop by drop application to each SIDE of the hammer, on the shoulder NOT the crown, then let dry overnight.

More time consuming than needling, but maybe not some Republican sponsored conspiracy to destroy life as we know it, as I originally suspected.