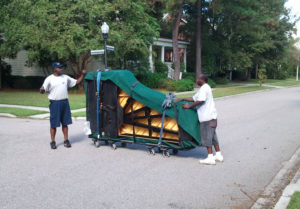 I said goodbye to a friend recently.

While with Yamaha in the 90’s I purchased a Yamaha concert grand…a CFIII 51GX to be precise. GX designates an experimental model and 51 designates the series. The 51 was a design experiment that incorporated a number of design features of a popular concert grand made by a famous maker & Sons. These features included tubular metal action rails and a separate plate cross brace among others. Thank heaven the damper underlevers had spoons and the plate height was set evenly and correctly meaning the action could be regulated to a very high level. It also did not sound at all like the other makers piano. This one had a colorful and sweet sound, not big and brash as one might expect. The 51GX represented a path not taken by Yamaha. The CFIIIS that was introduced grew out of the 54GX series. In fact, I don’t think the 51 was ever intended as an actual production path.

I really loved this piano. It was my first REAL piano and having a concert grand at home, when one was only a mediocre player at best, proved that I really was IN the industry. I went a number of years without playing with any degree of dedication, but did get back into it recently and really loved the power, range, scope and the oh-my-god  bass of that piano.

But, things change. I had a chance to acquire another really beautiful piano (more on that later) and decided to sell my Yamaha. It was purchased by a serious pianist in the Washington DC area and I am happy to see it off to a happy home.

I did get attached to that instrument. It was truly a friend on a number of levels. Saying goodbye, even for good reasons,  is hard.