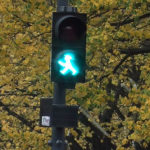 SPOILER Alert: There is nothing related to pianos in this post.

I was back in Berlin recently. This being my 3rd trip, I’m beginning to feel like I know my way around a little. However this time it was freezing and dangerous since clearly nobody shovels snow in Berlin and every single walking surface was covered by an inch thick, uneven, rock hard layer of ice. The streets, however, were fine.

Berlin has any number of places to recommend to visitors, but I’m recommending the Food floor  on the 6th level of the KaDeWe department store.

The store is a huge upscale department store, similar to Bloomingdales in the US, and more upscale than Macys. However the 6th floor is a food lovers delight. Similar to Harrods in London, you can find any kind of food here, from raw meats and fish of any type, to canned, bottled and boxed items in a bewildering array.

However the revelation to me was the variety of food “stations” (for lack of a better word) where one could grab a quick bite. These ranged from a variety of wine and champagne bars, to a number of small individual cooking stations, some with tables and some with only counters, where one could eat whatever was the specialty of that station. I chose fish and had them take a beautiful hunk of salmon from the display and plop it directly on the grill.

Other stations included shell fish (oysters, clams etc), sushi, steaks and chops, wurst and sausages (including some, the ingredients of which I chose not to consider)  and just about everything in between.

While I was having my dinner, a group of casual (youngish) business people sat down and ordered 10 Lobster tails and had a huge plate of oysters sent over from the shell fish station nearby. Clearly the business climate is improving somewhere.

My salmon, salad and rice enjoyed, I moseyed over to a small hidden bar serving genuine  Budwiser beer from the Czech Republic.This is a wonderful true European Pils with no connection to the yellow water called Budwiser in this country.

The real treat was the bartender who looked like he came out of a George Groz cartoon.  Pouring a beer took almost 5 minutes, with a glass rinse, an initial pour then a pause while the head settled. Another pour followed by another head settle, followed yet again. The result was a perfect foam head that clearly was an important part of the beer experience that he served up.

There is craftsmanship everywhere, you just have to look for it.