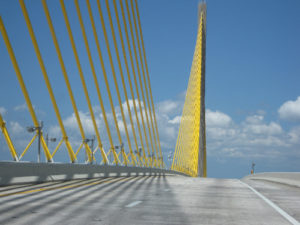 Fall means catching up on some travel and I headed south to the Orlando area and Naples. I flew into and out of Orlando, driving down to Naples and back. This is a bit of a drive but I had a pretty nice car due to an upgrade from Hertz.

I visited my dealer who also handles Steingraeber and saw my first Steingraeber carbon fiber soundboard. The idea here is NOT that carbon fiber works as well as wood. I heard it and it doesn’t. The point is that this allows high quality pianos to be installed in hostile (at least to pianos) environments that would ordinarily eat soundboards for lunch. My understanding is the the Moscow Conservatory owns a couple of these and that makes sense. Harsh climate, long cold winters, old facilities with no chance of adding enough humidity to the bone dry winters. This board sounds reasonable enough over most of the expanse of the keyboard. The tone is a little off but the sustain is good and the action of course feels completely normal.
.
.
I’m a fan of trying something new and this is a great way of addressing one of the biggest traditional problems in the piano world; low humidity. That it comes from such a small, old world maker as Steingraeber is great. As you will see in a later post, soundboards are not the only thing Steingraeber is experimenting with.